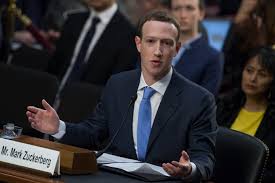 http://time.com/5235461/mark-zuckerberg-facebook-ted-cruz/
Facebook CEO Mark Zuckerberg issued a public apology in an old-school format Sunday — via a full-page newspaper ad in major U.S. and U.K. papers.
The ad, printed in clear type over Zuckerberg’s signature, begins: “We have a responsibility to protect your information. If we can’t, we don’t deserve it.”
It then refers to “a quiz app built by a university researcher that leaked Facebook data of millions of people in 2014. This was a breach of trust, and I’m sorry we didn’t do more at the time. We’re now taking steps to make sure this doesn’t happen again.”
That’s a rather mealy-mouthed summary of the Cambridge Analytica debacle, in which a ‘quiz app’ was only the tip of the spear wielded by political operatives set on influencing the U.S. election.
Nonetheless, the ad continues. Zuckerberg says that Facebook has “already stopped apps like this from getting so much information. Now we’re limiting the data apps get when you sign in using Facebook.” Zuckerberg also writes that Facebook will investigate, ban, and inform users about other apps that had access to similarly large amounts of data. Facebook will also provide better privacy protection by reminding users what apps they’ve granted access to their data.
“Thank you for believing in this community,” Zuckerberg concludes. “I promise to do better for you.”
According to Vanity Fair, the ad appeared in British newspapers The Observer, The Sunday Times, Mail on Sunday, Sunday Mirror, Sunday Express, and Sunday Telegraph. In the U.S., it appeared in print editions of The New York Times, The Washington Post, and The Wall Street Journal.
The ad is the latest in a weeklong series of public apologies by Zuckerberg and other execs. Such apologies, followed by promises to do better, are getting less convincing every time. And the surge in calls to #deletefacebook suggests users seem to be waking up to the fact that Facebook is less a “community” than an ingenious digital glue trap. Investors certainly seem to doubt that Facebook is going to emerge unscathed. And all the humble apologies in the world seem unlikely to save Zuckerberg’s political ambitions.
The irony of Facebook’s CEO taking out a print ad to apologize for the company’s biggest scandal ever also can’t be overlooked. Facebook grew in part by leveraging the work of established publications, then became a major vector for manipulative “fake news.” Now, Zuckerberg seems to be implicitly acknowledging that print remains a valuable format when you really, actually want to be taken seriously.
http://fortune.com/2018/03/25/mark-zuckerberg-facebook-ad/
https://en.wikipedia.org/wiki/Mark_Zuckerberg
at 13 April
Email ThisBlogThis!Share to TwitterShare to FacebookShare to Pinterest