What is the difference between United Kingdom, Great Britain and the British Isles?

This is a common doubt some people have, especially if you are not from that part of the world.

Here is a simple explanation:
--------
Great Britain
Great Britain refers to the island that consists of England, Scotland and Wales. It is the largest island in Europe and the 9th largest in the world. It does not include the smaller islands that are near it.
--------
United Kingdom
United Kingdom, commonly referred to as the UK, consists of England, Scotland and Wales (Britain) as well as Northern Ireland. It also includes the many islands that are near Great Britain. Officially it is called the United Kingdom of Great Britain and Northern Ireland.
------
Ireland
Ireland is an island that contains the Republic of Ireland and Northern Ireland. The island is to the west of Great Britain. You will notice that Northern Ireland is considered both a part of Ireland (the island, not the state) as well as a part of the United Kingdom.
---------
Crown Dependencies
These are three self-governing possessions of the Crown which include the Isle of Man (between Britain and Ireland) Guernsey and Jersey (off the coast of France). Being independently administered jurisdictions, they are not considered a part of the United Kingdom.
----------
British Isles
This is the group of islands north-west of continental Europe and consists of Great Britain (England, Scotland and Wales), Ireland (Republic of Ireland and Northern Ireland) as the Crown dependencies (Isle of Man, Guernsey and Jersey)
-----
https://www.facebook.com/1007646292721222/posts/1350624135090101/ 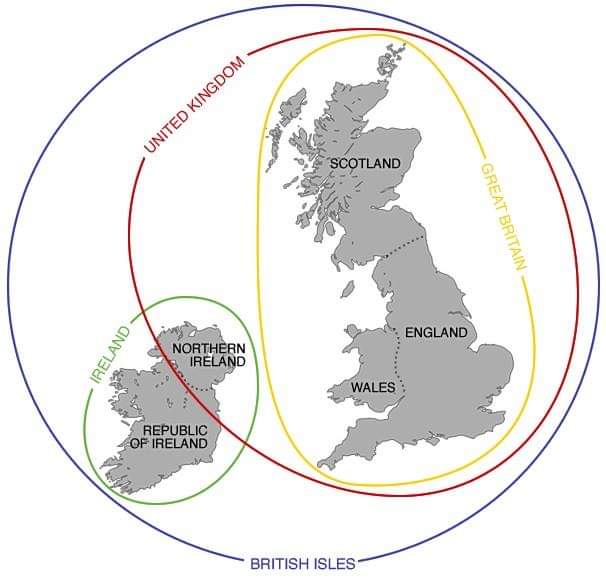 at 10 January
Email ThisBlogThis!Share to TwitterShare to FacebookShare to Pinterest